The Head in the Sand Approach

It was always predictable that the Howard League for Penal Reform’s Commission on Sex in Prison would ruffle more than a few feathers. Prisoners and sex are two topics that just don’t go together in the right-wing vision of harsh imprisonment.

This is reflected in the present position of Prisons Minister Andrew Selous: head in the sand, arse in the air, busily pretending that there isn’t really any problem. His latest considered response to the findings of the Commission concerning the risk that imprisonment and prison violence can lead adolescent boys towards dysfunctional attitudes towards sex and even, in some cases, set the foundations for future sexual offending was: “Alarmist comparisons drawn off the back of different justice systems in other countries help no one.”

Well, well. This is a minister of the same Ministry of Justice (MOJ) that was solely responsible for blocking Commission researchers from interviewing serving prisoners and moreover, those released on licence. In effect this barred academics – including former prison governors, psychologists and even Sir Edward Garnier QC MP, the Conservative’s own former Solicitor General – from getting first-hand testimony from those currently in custody.

The ban on face-to-face interviews with ex-prisoners on licence also excluded all lifers and pretty much anyone who has recently served a year or more inside. In short, those people who just might know what they are talking about on the basis of personal experience. Now Mr Selous – who, as is painfully obvious, doesn’t know a thing about his own portfolio – falls back on accusing the Commission of being “alarmist”, while criticising the very researchers his own ministry banned from entering prisons because they have had to make use of some data from abroad!

Of course, lest we forget this is the same junior minister who fluffed his lines on BBC Newsnight back in December (see here) and who also made a pig’s breakfast of his last ill-informed comments on sexual assaults and rape in prison (see here). Is it any wonder that the official figures for sexual attacks committed in our prisons are rising to 10-year highs when the Prisons Minister is in such total denial? In fact, as I’ve argued in previous blog posts, the reported incidents are only the tip of a much larger iceberg of sexual violence and exploitation inside our prisons that the government seems determined to play down or even ignore.

Predictably, Mr Selous has completely failed to address the important issues raised by the Commission’s research in respect of the potential impact of imprisonment on children. Researchers have warned that:

• Prison limits normal adolescent development and can delay teenagers’ maturation process.
• Punishing boys for normal sexual behaviours encourages them to keep sex secret, or feel ashamed about it.
• Violence among prisoners and the use of force by adults to control children might make children more likely to be sexually aggressive in adulthood. 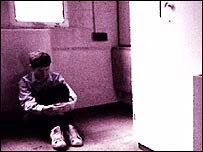 The Commission reports also draw attention to the serious risks of accommodating vulnerable children with complex needs in large institutions without appropriate levels of staffing. To all of these issues, Mr Selous – as usual – has nothing meaningful to contribute. I suppose we should be grateful that he is an unpaid part-timer rather than a salaried minister, otherwise that would be yet another wodge of public money wasted.

Based on my own experience, prisons are often very misogynistic environments. Many of the young prisoners I met inside, aged 18 and up, came from very disturbed family backgrounds where their mothers and other female relatives had often experienced violent relationships, sometimes in the context of misuse of alcohol and drugs. A fair number of these young men had already spent time, sometimes years, inside Young Offender Institutions (YOIs) or other types of secure environments before ‘graduating’ to adult prisons.

I also believe that a significant proportion of adult male prisoners – far higher than would ever admit it – have experienced sexual abuse, as well as severe physical and mental cruelty, often within their own extended home environments during childhood. None of this negative ‘conditioning’ can be a good preparation for balanced, non-abusive adult relationships.

A great many adult male prisoners seem to suffer from arrested development in one form or another. Some remain stuck in a permanent state of adolescence, unable to move forward and grow into responsible adults. This extends to risk taking behaviour and a self-centred view of the world. Others revel in the role of class clown.

These childish attitudes can be seen in the ways in which women who work in adult male prisons are viewed by many cons. Either these female staff must be lesbians (generally the uniformed officers) or ‘bitches’ who enjoy having control over men (especially female psychologists or governors).

Even the everyday language on the wings is highly misogynistic. In a pack of cards the queen is routinely called “a slag”.

In general, the only adult women that many male prisoners don’t verbally abuse are their own mothers, sisters and – sometimes – their female partners. All other women are seen variously as being devious, deceitful – and therefore potentially unfaithful – or else as sex objects. For anyone who believes in equality and human dignity – whether they are staff members or inmates – prison can be a constantly challenging environment.

Since most of these negative attitudes and behaviours are learned in childhood and adolescence, it’s hard to see why the findings of the Howard League Commission should be so controversial. What part of a common sense approach to these issues does Mr Selous not understand? Trying to sweep these problems under the carpet does nothing to improve public protection or to reduce future reoffending.

Surely we should acknowledge that helping troubled and challenging kids through the storms of puberty and youth – particularly when they are in the very unnatural environment of custody – makes perfect sense. Boys and young men who come out of the prison system regarding most women as ‘slags’ and ‘bitches’ are much more likely to carry such distorted attitudes with them back onto the streets, often with terrible and tragic consequences.
Posted by PrisonUK at 11:50