Smoking in prison is a controversial subject, not least because an estimated 80 percent of adult prisoners smoke. Many have had tobacco habits since childhood and given the high levels of stress in prison, efforts to kick the weed often end in failure. As a lifelong non-smoker, I have been able to view the subject with a degree of detachment. I'm not a fan of tobacco, but at the same time I'm not a 'born-again' anti-smoking zealot.

At present rolling tobacco - currently known as "burn" in jail slang - is freely available on prison canteen order sheets in adult establishments and most cons religiously order their 'ounce' or 'two ounces' or whatever they can afford using their weekly "spends" (prison wages, plus any private cash available depending on the individual's IEP level). Even some cons who don't smoke order burn as it serves as a substitute internal prison currency. Want a decent hair-cut from a fellow inmate? That'll cost half an ounce or 12.5 g (around £4.00). Chocolate (50p a bar) and tins of tuna (£1.20) are also alternative currencies, but rolling tobacco remains the unit of exchange of choice in British prisons.

That may be set to change in the not too distant future. Rules on smoking inside prisons have been getting increasingly more restrictive and there are Ministry of Justice plans to make all prisons in the UK smoke-free by around 2015. The prohibition is expected to be introduced incrementally and most establishments have already restricted smoking to prisoners' cells (with the doors closed). Smoking in the open air, for example outside buildings or on the exercise yard, has also increasingly been banned.

Officially, HMPS policy is that prisoners who don't smoke should not be forced to share cells with smokers. In practice, for "operational reasons" this isn't always respected. I was lucky in that I only had to spend one night banged up with a very heavy smoker. It wasn't pleasant and by the morning I really felt sick. Fortunately, I was then moved to share with another non-smoker.


In another prison I did opt to move in with a friend who was trying - unsuccessfully - to kick the habit. He signed up for a healthcare "smoking cessation" programme and was initially prescribed nicotine patches (which didn't work) and then Champix tablets. When stress finally defeated him, I agreed that he could smoke out of the open window. Still, I preferred to share a cell with a decent bloke on those terms to being banged up with a complete numpty who didn't smoke. 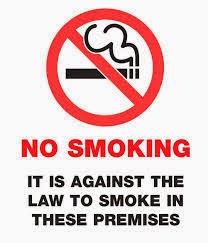 So how would a complete prohibition on burn work in practice? Total bans on tobacco have already been introduced in prisons on the Isle of Man and Guernsey. This radical step has not been without problems. For example, governor's adjudications for disciplinary offences linked to unauthorised possession of tobacco rocketed in the Isle of Man after the total ban was introduced in May 2008. Unlike the Isle of Man, however, Guernsey does permit prisoners to purchase and use e-cigarettes.

In theory, it should be easy to ban tobacco from closed prisons. Tobacco products can simply be removed from the weekly canteen sheet, meaning that any possession would then be unauthorised and a violation of prison rules. However, given that the Prison Service is often unable to prevent the smuggling of drugs into the estate, it seems a pretty safe bet that tobacco smuggling will present a new, and very lucrative, business opportunity for entrepreneurial cons.

There may also be implications for NOMS' commercial relationship with DHL, the current contracted supplier of canteen goods. A very substantial amount of prisoners' monies goes on buying tobacco. A total ban on sales has the potential to hit the profitability of the entire operation.

It is perhaps worth noting that since smoking was banned in New York's city jails in 2003, the average price of a contraband cigarette has rocketed to an amazing $30, while a full pack is reported to change hands at the infamous Riker's Island jail for around $200. Nice work if you can get it. Similarly, disciplinary actions against inmates and the arrest of would-be suppliers from outside the prison walls continue to rise. According to the New York Daily News, there had been a total of 85 arrests of people attempting to smuggle tobacco into the city's jails between January 2012 and May 2013.

Of course, whenever the issue of a complete smoking ban in prisons is raised in the media there are dire predictions of riots and violence. I'm not personally convinced. Prisoners tend to be a pretty reluctant rioters these days. It does happen, but the draconian sentences that follow serious disorder and damage - up to nine years on their sentences for the ring-leaders of the HMP Moorland riots in 2010 - do discourage major disturbances.

I do think that there are going to be difficult - and very grumpy - times ahead, however, if the tobacco ban is imposed as planned in 2015. I predict a massive rise in 'nickings' (internal charging) and governors' adjudications in connection with the unauthorised possession of tobacco products, as well a drain on staff resources at a time when numbers of uniformed officers are down to dangerously low levels.

A total ban will also impact on prison staff (uniformed and civilian alike) who will have to trudge out of the establishment - checking in their keys - in order to enjoy a crafty ciggie in the carparks outside the security perimeter. And as with all prohibitions of commodities, the real winners will be the smugglers who will take advantage of the new market conditions to cash in.
Posted by PrisonUK at 13:38