Thoughts on Sharing a Cell

Recently, the Chief Inspector of Prisons, Nick Hardwick, has been sounding alarm bells about failures in risk assessments when prisoners have to share cells - an issue that is becoming more acute owing to the current overcrowding crisis in UK prisons.


According to Hardwick's latest report, published earlier this week:  "Risk assessment procedures are often delayed or poorly completed and information sharing is still a considerable weakness across the prison estate. Too many prisoners still share cells designed for one regardless of sentence status, age or other issues of compatibility. Prisoners from black and ethnic minority groups consistently report a worse experience than white prisoners."

I shared a cell throughout most of my sentence, which I served in two B-cats, one C-cat and one D-cat (open prison). In fact, I only had a single cell for about the last six weeks of the ten and a half months I was at the D-cat. 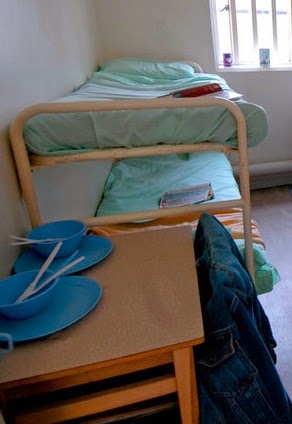 During this time, three of my cell-mates suffered from well-documented mental health problems, another was addicted to steroids and other substances, so had serious - and often frightening mood swings. Only one of these was actually receiving any form of mental health treatment or support. I won't pretend that it was easy living with them. On the other hand, I was also lucky enough to share a small cell - mostly designed for one prisoner - with five really good cell-mates (or "pad-mates" as we prisoners call them) - although only one at a time. We became firm friends and I'm still in contact with several now we have all been released. Sharing a cell with a good pad-mate is one positive experience to come out of prison.
I never applied to have a single cell until the last few months when I was in an open prison. The idea of spending many hours each day confined to a tiny concrete box behind a massive steel door on my own would have been infinitely less bearable than having another human being for company. In our adversity, we always tried to find moments of humour to share. We also shared books, shared food bought from the prison canteen list and discussed everything from politics to religion to family troubles.

I believe that solitary confinement - particularly of the kind imposed on prisoners who are serving their sentences on the Basic regime (no rented TV, virtually no personal possessions, very little chance to shower or access the payphone to keep in touch with your family) - actually leads to more acute mental heath problems, along with self-harm and suicide. I would much prefer to be locked up with a half-decent fellow prisoner, than on my own for 16 to 23 hours per day.

Sure, you have to make compromises and it's never nice to have to use an in-cell toilet in front of another bloke, but in my view single cells have the capacity to fuel psychological problems, including paranoia and a retreat into unreality. Of course, I also feel that there are many thousands of prisoners who are living with mental health conditions who should not be in prison in the first place. Better to campaign for more appropriate treatment and support in a non-punitive environment for people who have mental health problems, than to seek to impose solitary confinement on the majority of the prison population. It's a personal view, but one based on direct recent experience.
Posted by PrisonUK at 10:09