Mamba... a Nasty Name for a Nasty Thing

There was a time, according to older lifers, when prisoners smoking cannabis was no big deal. One very long-termer once told me that back in the 1970s and early 1980s he used to sit on his bunk smoking a bit of smuggled weed and chat with the wing screws. No-one much cared… in fact turning a blind eye to such activities was tacitly approved as a bit of puff kept the cons quiet in the days before in-cell TV. 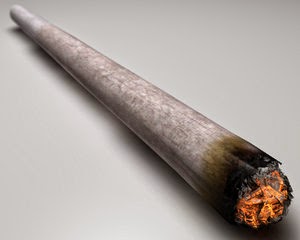 Then, in 1996 Mandatory Drug Testing (MDT) was introduced across the prison estate, following some pilot projects at individual nicks. According to the Home Office blurb: “The primary aim of MDT is to measure the extent of drug use in prison and related trends, to detect and punish those using drugs and to generally discourage drug initiation and involvement among the inmate population. The programme also acts as a mechanism for referral of drug dependent prisoners into appropriate treatment.”

Prison MDTs can be ordered on suspicion, on a random basis or in order to clear an individual prisoner for a trusted role or job. Basically, a urine sample is required to be provided under controlled conditions and this will be tested for the presence of illegal drugs.

The Home Office (before the Ministry of Justice was set up) issued a national report on MDT in 2005 - The Impact of Mandatory Drug Testing in Prisons – and this revealed that “about two in five prisoners (39%) had used some illicit drug at some time in their current prison, one in four (25%) said they had used drugs in the past month and about one in six (16%) in the past week.” Not a stunning success, really. Of course, supporters of the MDT regime would no doubt argue that drug use would be much higher if random testing wasn’t being carried out.

The report quoted also observed that there is very little injecting of drugs in prison (presumably because of the difficulties of obtaining the syringes and needles that would be required) and that most illicit drugs use involved the smoking of heroin and cannabis. Now, as any experienced con will tell you, cannabis and its derivatives remain in the user’s body for up to 28 days, whereas heroin can be undetectable after a couple of days. That is one of the reasons that a major criticism of the MDT system is that it has encouraged the use of harder drugs by default.

Those debates pre-dated that arrival of so-called ‘synthetic cannabis’ – variously known under generic street names such as Spice, K2 and Black Mamba. These are basically chemical compounds that are sprayed onto herbs and variously advertised as ‘herbal highs’ or sometimes ‘herbal incense’. Users report getting a buzz that is similar to the use of the stronger types of marijuana (eg ‘skunk’). However, one of the major risks for users is that no-one (other than the producers) really knows what chemicals have been used to produce the effect. With much of the production located outside the UK, the only way to ascertain what the active ingredients are is lab analysis.

As a consequence, governments around the world regularly act to criminalise certain cannabinoids. For example, ‘Spice’ was legal in Britain until December 2009 when it was criminalised and classified as a Class B drug. However, producers often make minor alterations to the formula and side-step the legislation.

In prison, the generic term for such ‘herbal highs’ tends to be ‘Mamba’, although the actual product names vary. Mamba was a problem at three of the prisons I was in. Perhaps unsurprisingly it was reaching epidemic proportions at the D-cat (open prison) owing to the ease with which inmates could smuggle it in following family visits or Release on Temporary Licence (ROTL) for town or home visits.

Use of Mamba was most evident during the final evening roll check when cons had to report to the unit office with their ID cards. Night after night prisoners would stagger down the main corridor, sometimes barely able to stand. On certain landings – mainly those furthest away from the screws’ office – the fishy smell of ‘herbal highs’ was over-powering. How many cons were using? Probably about 40 percent, maybe slightly higher when a regular supplier established himself in the nick.

One of the main attractions of getting high with one or other of these smokes was that the existing MDTs didn’t register Mamba use. The prison authorities kept threatening to introduce a new test that would show up who was using, but by the time I was released nothing was in place and mates who are still there inform me that no such testing is being done at the moment.

That hasn’t stopped the prison management cracking down on the use of Mamba and similar substances. Back in the summer of 2013 there was a sudden spate of prisoners being transferred back to closed conditions. I think the record was something like 23 ship-outs in a single week (roughly six percent of the entire prisoner roll). This followed a period of regular ambulance visits to the establishment to take prisoners who were having fits for hospital treatment and observation. Of course, prison wags dubbed this “the Mambulance”.

Having seen some of the effects of Mamba and its ilk, particularly on young prisoners, I can understand the concerns. At its peak use during the summer of 2013, the unit washrooms were regularly covered with vomit. Prisoners were found passed out on stairs and landings. A few heavy users were rumoured to have been so spaced out that they had simply stood up in the middle of their rooms and urinated on the floor and themselves. It was a miracle no-one actually died from choking on their own vomit.

One young lad – serving an Indeterminate Sentence for Public Protection (IPP) and way over tariff – arrived at his first open prison. This should have been a massive step forward in his sentence progression towards his hearing before the Parole Board and the prospect of eventual release. Many IPPs would have given their right arm for the chance. Within less than 24-hours the reception was found by screws in the early hours of the morning flat out on his back in the middle of a lawn. He was shipped back to a closed prison the same day, probably setting back his chance of release by another 2-3 years. I felt sorry for his family.

And then there are the problems of debt. Prisoners who earn £9.00 a week cannot afford to have a Mamba habit, particularly if they also smoke tobacco, so a vicious spiral of debt ensues. Some prisoners got in so deeply that they felt obliged to go to the screws and request a return to closed conditions because they really had no prospect of paying off their debts to the Mamba suppliers. The alternative was likely to have been a good beating or else being forced to beg their families to bail them out. A few were bullied and cajoled into working as ‘joeys’ – ferrying drugs around or smuggling them in.

Drugs are popular in prisons because they help some inmates cope with the daily boredom and depression of life behind bars. One long-termer used to call it getting his head “out of the window”. Unfortunately, the havoc caused by drugs, including the serious consequences of danger to health, debt and bullying, can make life unbearable for those who get caught up in the culture, especially the younger lads and those who are weaker and vulnerable. Mamba… a nasty name for a nasty thing.
Posted by PrisonUK at 11:22